They have started their PMP programme. A big thank you to the parents who have volunteered to help run the programme. PMP involves a variety of physical activities and so far in their lessons they have covered balance, crawling, shapes, rolling, memory, eye tracking, throwing and catching, fine and gross motor skills. Ask them what their favourite station is!

The Year Twos have just finished their unit on cricket where they learnt how to bowl, bat and field. They used the skills they learnt in a variety of cricket games.
Gymnastics
The Year Twos next unit in PE will focus on gymnastics. They will use the shapes and skills learnt in Year 1 and create simple sequences on a variety of gymnastics apparatus.

During their first unit they have looked at netball and the team work required to play netball.

The Year Threes will be starting a new unit on gymnastics next week with a focus on creating sequences. With their class teachers they will be looking at striking and fielding and how it ties into their class unit on forces.

The Year 4s looked at yoga during this unit and how it can be beneficial physically and mentally. It was linked to the class unit on beliefs and values.

The Year 4s gymnastics unit focussed on putting together gymnastics sequences on different apparatus. They looked at how they could make their sequences aesthetic.

Starting next week the Year 4s will be doing games units. They will be learning basketball with Mr Teahan and touch/tag rugby with their class teachers.

In their PE lessons with Mr Teahan the Year 5s were taught the game of netball. This involved learning the skills of passing, shooting, defending and attacking. They were able to try a variety of netball positions. Ask them what their favourite position was.

With Mr Teahan the Year 5s will be creating complex sequences with a focus on the transitioning part of creating a sequence. With their class teachers they will be looking at games. They will look what is common in all games and then create a game that they will then teach to a Year 1 class.

During Unit 1 the Year 6s were taught the game of handball. They were introduced to the rules of handball and learnt the skills of passing, travelling, defending, attacking, scoring and goalkeeping.

The Year 6 swimming unit has concluded and the coaches were impressed with the attitude and improvement shown by all the students. Well done!

The new units for Year 6 will start next week. With Mr Teahan the focus will be on gymnastics and they will be creating complex sequences using the skills taught in previous years. With their class teachers they will be learning badminton. 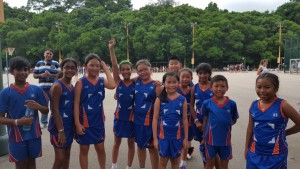 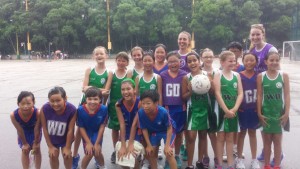 On the 3rd of October we had our first netball game against the Hong Kong Cricket Team.We all played really well but we sadly lost 3-2.We would like to thank our coaches Ms Andrews,Ms Younie,Ms Mahbubani and all the parents for supporting us. Aayesha (6L)

On the 3rd of October, B.H.S Starburst played netball at Fa Hui Park. We played against the E.S.F Wildcats and they were pretty good. Unfortunately, we lost 5-0 to Wildcats but it was a good game. We would like to thank Ms. Andrews and Ms. Younie for coaching us and all the parents who came to support us. Jessica (6L)

Welcome and please be advised that ESF uses cookies. By accessing an ESF, ESL or PTA web site and other online ESF services, such as ESF’s mobile app, users agree that ESF can store and access cookies, IP addresses and use other methods in order to collect website usage data, and improve user’s online experience. By continuing to access this web site, users agree to the use of cookies, which is handled in accordance to the ESF Data Privacy Policy. Information collected via cookies is handled in accordance with the ESF Personal Data Handling Policy and its related Personal Information Collection Statements (“PICS”). A copy of the PICS can be found on the ESF web site

Welcome and please be advised that ESF uses cookies. By continuing to access this web site, users agree to the use of cookies and the information collected by them by ESF.